A rule of thumb for gel and AGM batteries states that the minimum charging current should be 15 to 25 % of the battery capacity. During charging, you usually continue to supply power to connected devices, and this power consumption should be added to the 15-25 %.

This means that a 400 Ah battery bank and a connected load of ten amperes requires a battery charger capacity of between 70 and 90 amperes in order to charge the battery in a reasonable time.

A battery charger with temperature compensation for optimal protection 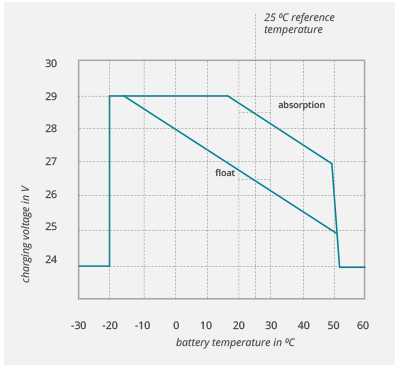 Because devices such as refrigerators are always drawing power from a battery, even while it is being charged, Mastervolt’s temperature compensation includes a maximum offsetting effect to protect the connected devices. The compensation is at most 14.55 V for a 12 V system, and 29.1 V for a 24 V system.

At very high (> 50 °C) and low (<-20 °C) temperatures, wet gel and AGM batteries may no longer be charged. Outside of these limits, the Mastervolt battery charger will continue to supply the connected consumers but not charge the batteries.

Adjusting the voltage to a higher or lower temperature is not required for Lithium Ion batteries.

The formula below is used to calculate the charging time of a Gel or AGM battery:

The formula below is used to calculate the charging time of a Lithium Ion battery:

Lt = charging time
Co= capacity drawn from the battery
eff = efficiency; 1.1 for a Gel battery, 1.15 for a AGM battery and 1.2 for a flooded battery
Al = battery charger current
Ab = consumption of the connected equipment during the charging process

Calculating the charge time of a battery should take into account the following:

Another thing that needs to be kept in mind when calculating charge time is that the last 20 % of the charging process (from 80 to 100 %) takes around four hours with wet, gel and AGM batteries (this does not apply to Lithium Ion batteries). In the second phase, also called the absorption or after-charge phase, the type of battery determines how much current is being absorbed, independently of the capacity of the battery charger.

The after-charge phase phenomenon again does not apply to Lithium Ion batteries, which are charged much faster.

The harmful effects of ripple voltage on batteries

Mastervolt battery chargers are equipped with excellent voltage regulation and the ripple voltage they produce is always lower than 100 mV.

Finding the state of charge of a battery

The adjacent explanation regarding the Peukert exponent shows that the state of charge of a battery cannot simply be determined based on, for instance, measuring battery voltage.

The best and most accurate manner to check the state of charge is to use an amp hour meter (battery monitor). An example of such a meter is the Mastervolt MasterShunt, BTM-III or BattMan battery monitor. In addition to the charge and discharge current, this monitor also indicates battery voltage, the number of amp-hours consumed, and the time remaining until the battery bank needs recharging.

One of the things that set the Mastervolt battery monitor apart from other suppliers is the availability of historical data. This shows, for example, the charge/discharge cycles of the battery, the deepest discharge, the average discharge, and the highest and lowest measured voltage.

On the surface it seems easy to calculate how much longer a battery will continue to supply sufficient power. One of the most common methods is to divide battery capacity by discharge current. In practice, however, such calculations often turn out to be wrong. Most battery manufacturers specify battery capacity assuming a discharge time of 20 hours. A 100 Ah battery, for instance, is supposed to deliver 5 amps per hour for 20 hours, during which time voltage should not drop below 10.5 volt (1.75 V/cell) for a 12 V battery. Unfortunately, when discharged at a current level of 100 amps, a 100 Ah battery will deliver only 45 Ah, meaning that it can only be used for less than 30 minutes.

This phenomenon is described in a formula – Peukert’s Law – devised more than a century ago by the battery pioneers Peukert (1897) and Schroder (1894). Peukert’s Law describes the effect of different discharge values on the capacity of a battery, i.e. that battery capacity is reduced at higher discharge rates. All Mastervolt battery monitors take this equation into account so you will always know the correct status of your batteries.

Peukert’s Law does not apply for Lithium Ion batteries as the connected load will have no effect on the available capacity.

The Peukert formula for battery capacity at a given discharge current is:

I1, I2 and T1, T2 can be found by carrying out two discharge tests. This involves draining the battery twice at two different current levels.

One high (I1) – 50 % of battery capacity, say – and one low (I2) – around 5 %. In each of the tests, the time T1 and T2 that passes before battery voltage has dropped to 10.5 volt is recorded. Carrying out two discharge tests is not always simple. Often, no large load will be available or there will be no time for a slow discharge test. You can retrieve the data necessary for calculating the Peukert exponent from the specifications of the battery.

Under normal conditions, gel, AGM and Lithium Ion batteries produce little or no dangerous hydrogen gas. The little gas that escapes is negligible. However, just like with all other batteries, heat is generated during charging. To ensure the longest possible lifespan, it is important for this heat to be removed from the battery as quickly as possible. The following formula can be used to calculate the ventilation required for Mastervolt battery chargers.

This air flow is so small that normally natural ventilation will be sufficient. If the batteries are installed in a closed casing, two openings will be needed: One on the top and one underneath. The dimensions of the ventilation opening can be calculated using the following formula:

Lithium Ion batteries do not produce any hydrogen gas and are therefore safe to use. When batteries are charged quickly there is some degree of heat production, in which case the above formula can be used to remove the heat.

Contact your installer for larger systems with multiple battery chargers.